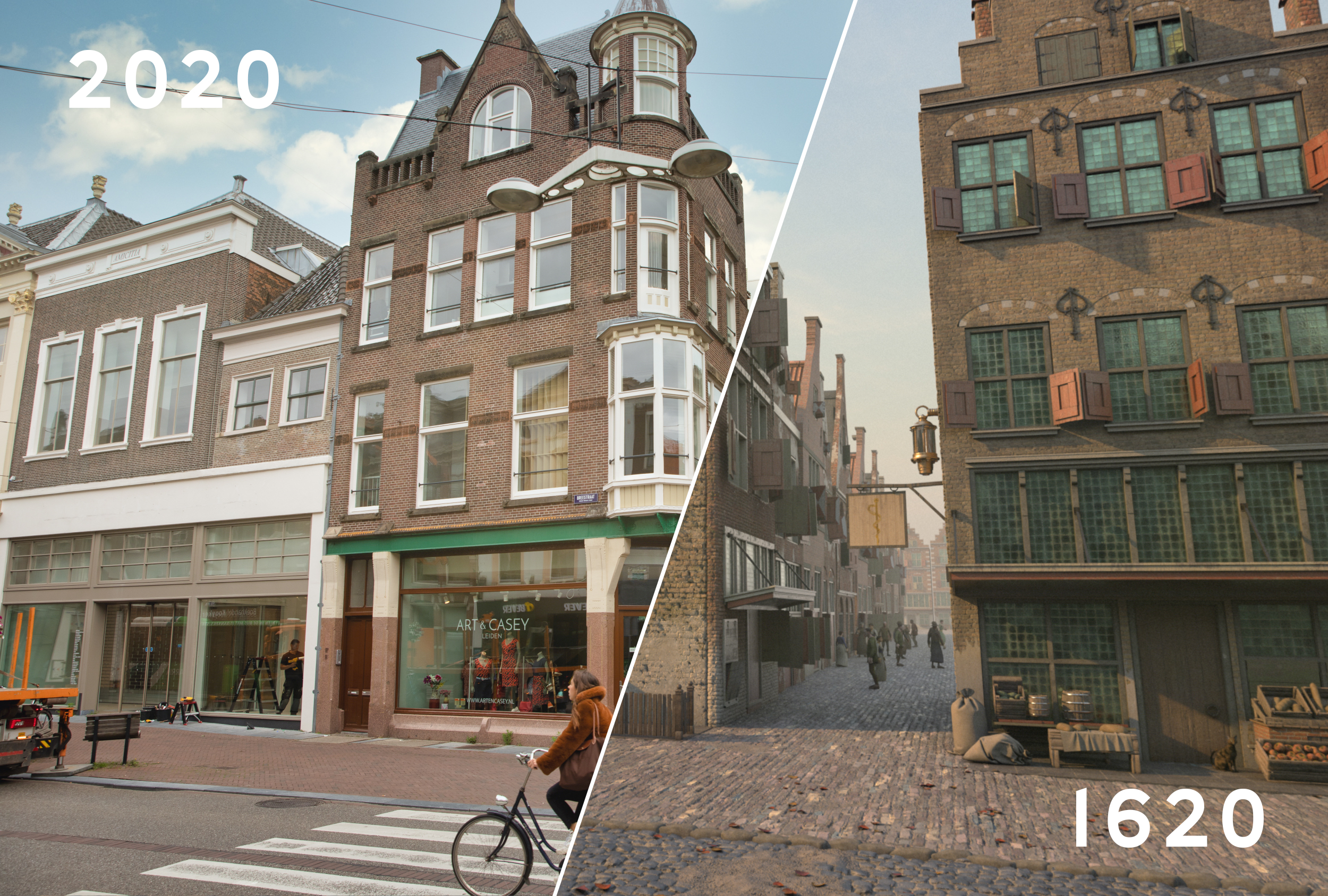 Time travelling is impossible, is it not?
Or seeing Holland through the eyes of the Pilgrims?

Digital technology offers help. The Hidden City Foundation (Stichting Verborgen Stad) aims to unlock the past with help of Virtual Reality. One can look around at a number of sights in Leiden and its surroundings which are linked to the Pilgrim story as if it was 1620. These highly realistic 360 reconstructions are the result of in-depth professional research in collaboration with archives, museums, universities and local historical associations. To make this possible, new state of the art software has been developed.

Furthermore:
The Onze Lieve Vrouwekerk was the Walloon church when the Pilgrims lived in Leiden.
The Begijnhofkerk was used by the university as a library and fencing school and by the Pilgrims for congregations.
Kloksteeg 17 is a typical 17th century house where Pilgrim Thomas Brewer lived.

Along streets and waterways
You can be on the spot itself with the smartphone app and also be lucky enough to go online and walk along the cobblestone alleys, leaning gables and canals surrounding the churches in which the Pilgrims held their services. One can look around on Leidens proud main street or take a peek at the modest interior of Thomas Brewsters house.


The Leiden reconstructions will be part of a project along the route used by the Pilgrims, the Trekvliet, all the way to Delfshaven, providing information on the 17th century context of the Pilgrims. The digital heritage can be used for education, scientific and  leisure and tourism purposes.

Once outside Leidens city walls the famous Dutch landscape of the 17th century unfolds: its high skies, its endless channels, ditches, lakes, dikes and the sails of the mills, with inland vessels passing by and church towers on the horizon. Following the Pilgrims at the first stage of their long journey one travels past The Hague and its former ducal residence where now the Estates General of the Republic assemble, or past the spot where Vermeer would paint his View of Delft.

Hopefully, this immersive experience is fascinating enough in itself; these 360 virtual spaces also offer access to stories linked to these places: about everyday hardships and pleasures of 400 years ago, about the people that worked and lived here, or about important events, painters or buildings. If interested, one can easily navigate and learn about all the relevant background topics, concerning for example the economic miracle of the Dutch Republic, global trade, slavery, the English Reformation, Europes religious wars, mass migration, the masters of painting or the Little Ice Age.
At any time users can leave comments: remarks, additions or personal stories.

This way the time machine becomes an online portal: immersive, interactive and suited for a wide audience.